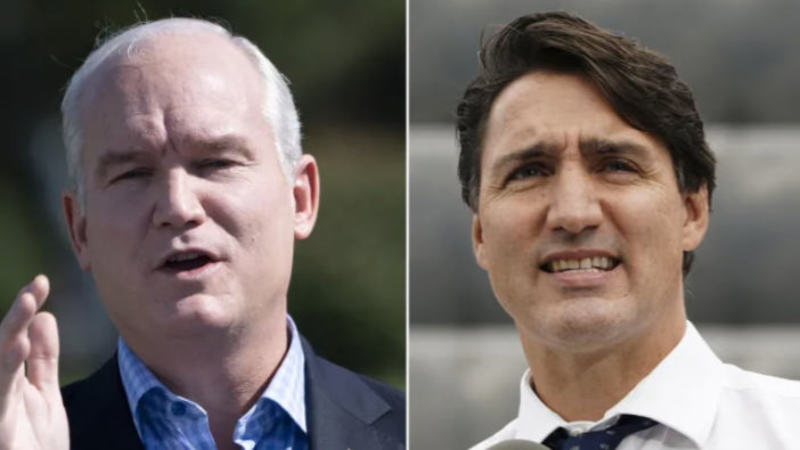 As the polls tighten, and with time running out, Conservative Leader Erin O'Toole sharpened his attacks on the campaign trail today by calling on voters to make election day a referendum on his primary opponent.

According to CBC's Poll Tracker, the Liberals have moved ahead of the Conservatives in national support for the first time in more than two weeks, but only by a marginal amount.

With election day just one week away, and with advance voting wrapping up Monday evening, there is little time left to win over voters.

O'Toole used this morning's announcement in Carp, Ont., just west of Ottawa, to frame a ballot box question on Trudeau's leadership and record.

O'Toole was there to make an announcement on maternity and parental leave. He dedicated most of his prepared remarks to a verbal assault on Trudeau — attacking his role in the SNC-Lavalin affair, his handling of Indigenous issues and his decision to call an election during a fourth wave of the pandemic as Afghanistan fell to the Taliban.

"That's not leadership, that's self interest. And it's Justin Trudeau through and through."

O'Toole pitched himself to voters as a non-celebrity who grew up in a blue-collar suburb.

"Where I grew up, you worked hard for everything you had. Your character and work ethic would earn the respect of your neighbours," he said. "That's my approach to leading Canada's Conservatives."

The Tories are running a TV and radio ad blitz in the final days of the campaign.

Just a few hours later, Trudeau responded by going after Conservative policies — including O'Toole's promise to return Canada's 2030 greenhouse gas emissions targets to the ones first set by former prime minister Stephen Harper, his reversal on banning certain firearms and his approach to mandatory vaccination for travel.

"I'm not impugning his character. I'm not saying he doesn't love his kids," Trudeau said from Vancouver. "I'm saying he's wrong about how to ensure jobs and prosperity and a protected country for people in the future. But that's what Canadians get to choose.

Trudeau was in Vancouver to announce that a re-elected Liberal government would make it a criminal offence to obstruct access to any building providing health services — including hospitals — or to intimidate or threaten any health care professional carrying out professional duties.

A number of anti-vaccine demonstrations are expected outside multiple Canadian hospitals today.

Trudeau has accused O'Toole of pandering to a "far-right, anti-vaxx fringe" by not requiring his candidates to be fully vaccinated and rejecting the idea of vaccine mandates. He pressed that line of attack during his appearance in Vancouver today.

"What we need is leadership that will be unequivocal that Canadians need to get vaccinated, not leadership like Mr. O'Toole who pretends that testing is equivalent to vaccination," Trudeau said.

"Just ask someone in a ventilator in the ICU how testing helped them."

NDP Leader Singh, who is polling in third place, also used a campaign stop to criticize Trudeau's record in office since 2015.

"I want to talk to you about the cost of voting for Mr. Trudeau. The cost is people end up paying the price for these broken promises," he said from an airfield in Sioux Lookout, Ont. before flying to Neskantaga First Nation to discuss the state of drinking water in the community.

Speaking at his own press conference from Gaspé, Que, Bloc Québécois Leader Yves-François Blanchet said that O'Toole's shift in tone came as the polls changed and warned all leaders against personal attacks.