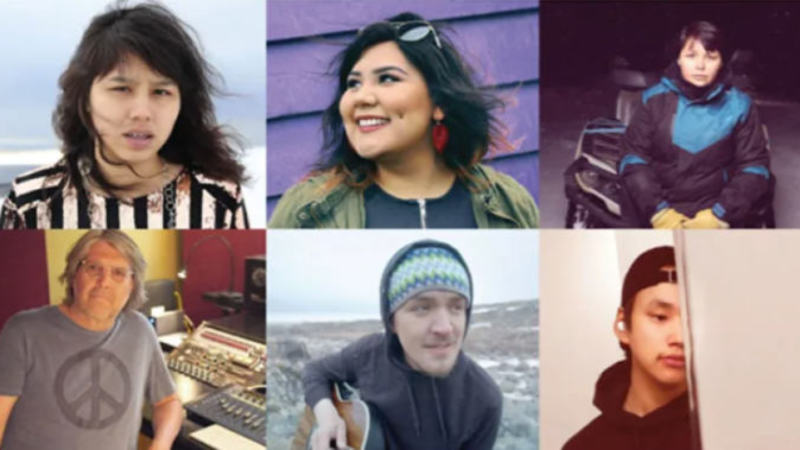 Six Nunavut artists have wrapped up a week of intense songwriting and producing at a music retreat held in an Ottawa mansion .

The Nunavut record label Hitmakerz rented a house in the city to connect the artists with music producers who've worked with big names like Buffy Sainte-Marie, Led Zeppelin, Sting and Nickelback.

Ottawa is a hub for many of Nunavut's 25 communities, all of which are fly-in only.

"There's such creative energy here, and it's really a city on the rise," said record label CEO Thor Simonsen.

Simonsen said he wanted to expose Nunavut artists to the music infrastructure in the city — which he compared to U.S. music hotspot Austin, Texas — as the territory doesn't have any dedicated performing venues.

Nowyuk was there to work on his second album, which includes covers of some of the classic Inuktitut songs he heard growing up.

The Pangnirtung artist said the album is a departure, not just in terms of the content but also the collaboration with other musicians. His first album won an Indigenous Music Award.

The musicians wanted to put together four albums over the week, and they did. One day, they even produced 15 songs.

Along with the Nunavut artists and acclaimed producers, a roster of Ottawa artists also came to work in the house.

"We would work in groups of two or three people — just randomly picked — and those groups would write their own songs," Simonsen said.

The mix allowed the artists to blend traditional styles with new sounds and create something totally different, Simonsen said.

"We would have a throat singer who was writing songs with a francophone artist. And we'd have a classically-trained musician with someone doing drum dancing," he said.

For Simonsen, who identifies as a Scandinavian and grew up in the Inuit culture in Nunavut, that mix is something he's passionate about.

He described the week as a win-win for everyone involved, and said he'd like to host more similar events in the city.