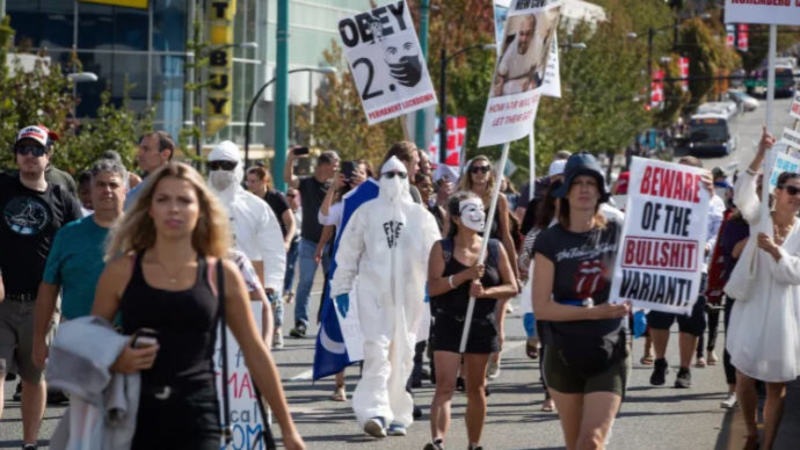 Indigenous people and criminology experts say the hands-off police treatment of people protesting mandatory vaccinations, many of whom are white, starkly differs from the way they treat Indigenous and Black protesters.

Days later, protesters with alleged ties to white supremacist circles yelled and pelted gravel at Liberal Leader Justin Trudeau. One man — the former leader of a local People's Party of Canada riding association — was arrested Saturday and charged with assault with a weapon.

She has been protesting old-growth logging in Fairy Creek where the RCMP have arrested 890 people, and were reported to have tackled, dragged, pepper sprayed and torn clothing of those objecting the logging.

Many of the protesters are Indigenous.

A judge recently declared the RCMP's actions were "unlawful."

In a statement, the RCMP said it "evaluates threat and risk and responds in an appropriate manner as per each case."

They said they will investigate and "may lay charges should any unlawful activity or criminal act be committed."

Janelle Shoihet, media relations officer at the B.C. RCMP, said people can make a public complaint to the Civilian Review and Complaints Commission for the RCMP, regarding allegations of police violence at Fairy Creek.

xʷ is xʷ čaa said that is not always an option for communities of colour.

"We're not believed and the process is traumatic, having to bring forward that violence and trauma of abuse to the system or the institution that did that harm," she said.

Jeffrey Monaghan, associate professor at the Institute of Criminology and Criminal Justice at Carleton University, says he believes that had the anti-vaccine protesters been Indigenous or Black, police would have intervened with force and made arrests.

"Despite the violence a lot of these [anti-vaccine] folks are committing, they're fundamentally treated as different forms of public threat," he said.

"That's what you're seeing in Fairy Creek right now," he said, adding that police also prepared in advance for actions in Wet'suwet'en territories.

"Indigenous movements in particular are under heavy scrutiny and surveillance ahead of time, which leads to much more repressive, much more managed, much more surveilled policing."

The second is what he calls reactive public order policing.

"That's what you're seeing with the anti-vaxxers [protests] where police are basically just forming basic lines, trying to get through the event."

Irina Ceric, a professor in the criminology department at Kwantlen Polytechnic University, says she believes the two types of treatment are a result of police seeing one group as a threat and the other as relatable.

"There is evidence that the police are more hands-off with anti-vaccine and anti-mask protests because there seems to be some, some level of affinity there," she said.

"It's really difficult now to argue that there isn't really systemic racism within policing agencies across Canada," she added.