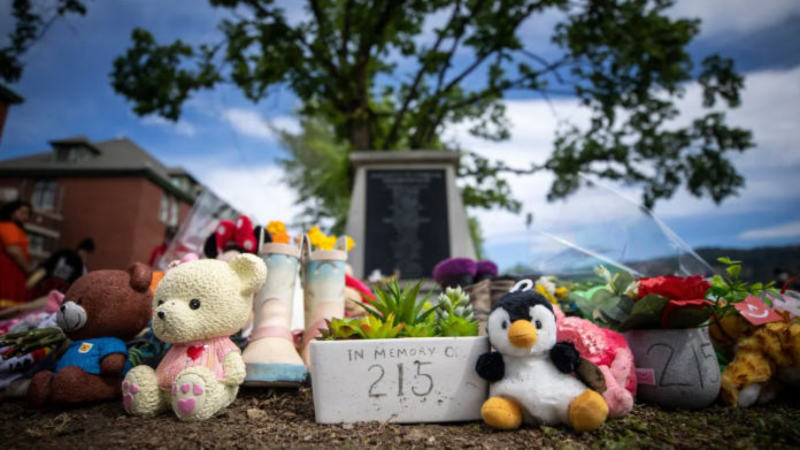 Tk'emlúps te Secwépemc language coordinator Ted Gottfriendson says the First Nation has tended to everyone else's needs since May, when

it revealed evidence of more than 200 unmarked graves in an orchard near the site of the former Kamloops Indian Residential School.

But now, he says, the Nation is taking time for itself to grieve in its traditional way.

"In terms of being able to carry out our traditional form of grieving yet, we haven't really been able to do what we're doing," Gottfriedson said.

"We have had very limited opportunities for our community to be at the site, to pay their respects, to honour the kids, and in their own way."

The irony of the situation isn't lost on Gottfriendson.

There was a time when Indigenous children were brought here from all over B.C. to be stripped of their languages, cultures and traditions, but now the former school is the setting for old Tk'emlups te Secwepemc traditions.

The children buried in the orchard came from First Nations across B.C., Gottfriedson said, but now it's as though they are Tk'emlúps te Secwépemc's own.

"We're treating the situation the same way we would treat a funeral, the loss of a loved one," he said.

The traditional grieving period lasts one year, Gottfriedson said. During this time, the bereaved don't attend public functions, nor do they speak in public.

But circumstances have forced the Nation to be flexible.

"We've had to make adjustments because this isn't a typical type of a mourning period for us," he said.

The Tk'emlúps te Secwépemc are divided into 13 original families that all Nation members can trace their ancestry to. Each family now has a day where they gather near the orchard to grieve.

Elder Diena Jules, a residential school survivor, paid respects at the site with her family.

Her daughter put the visit in perspective for her former partner, telling him if Jules had been buried in the orchard,  generations of people, including herself, her nine siblings and "all of our children and grandchildren and those yet unborn ... wouldn't be here."

A fire is kept lit near the orchard, and acts as a beacon for the spirits of the dead when a Tk'emlúps te Secwépemc caller summons them. Families perform ceremony and burn offerings of food and tobacco, taking care of the needs of the spirits as they did for others in life.

"It's a way for us to have that connection to those lost loved ones and for us to offer prayers, to offer food, to make those offerings that we deem as important during this time," Gottfriedson said.

The cultural code about death is much the same as it was before settlers arrived, even surviving colonialism and residential school, Gottfriedson said.

"There's various things that our people have followed since time immemorial," he said.

"And for whatever reason that I don't know why, the church or the government hasn't changed any of that."

After May's revelation, the conversation about the fate of the children buried in the orchard shifted to what's next.

Since a press conference in July about the use of ground penetrating radar technology, Tk'emlúps te Secwépemc has been quiet. While the traditional mourning period takes place, officials are also quietly laying the groundwork for what's next.

According to Gottfriendson, the Tk'emlúps te Secwépemc have had very initial internal conversations about repatriation of remains to their First Nation of origin.

But traditional laws make it a complex conversation.

"We believe that once those people are laid to rest, they should be left there," he said. "But once again, these are extenuating circumstances."

Gottfriedson said he recognizes that the children in the orchard came from different First Nations, which have different cultural codes and beliefs. They are trying to accommodate that by inviting other First Nations to grieve and perform their own ceremonies for the children they believe are buried there.

A special committee made up of family heads from each of the 13 original families has also been established to advise the community on this issue.

According to Diena Jules, while the groundwork is being laid for a final decision, there's no timeline for one. She's clear that it will take time, and for good reason.

"There's a lot of work to be done yet, and so we're doing things slowly and carefully to make sure that we do things right by these children," she said. "While they're not children now, but they were."

Support is available for anyone affected by the lingering effects of residential schools, and those who are triggered by the latest reports.

A national Indian Residential School Crisis Line has been set up to provide support for former students and those affected. People can access emotional and crisis referral services by calling the 24-hour national crisis line: 1-866-925-4419.