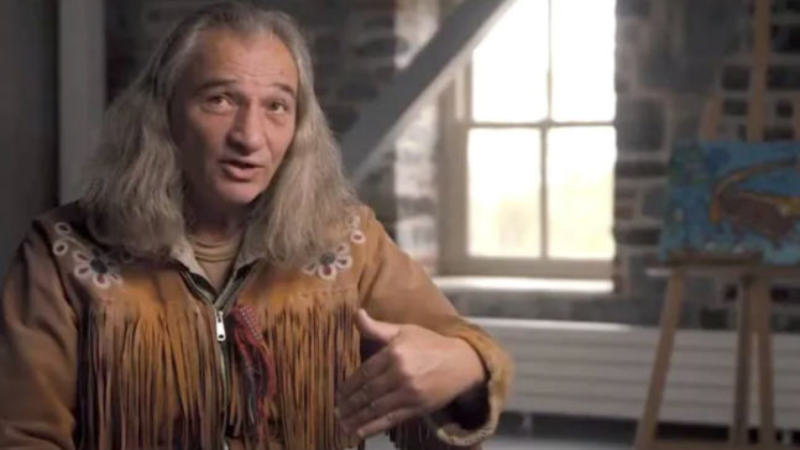 A celebrated artist in Kingston, Ont., who goes by an Ojibway name and is known for paintings on Indigenous themes has been making inaccurate claims for decades about being Indigenous and a Sixties Scoop survivor, according to family, members of 11 First Nations and other close acquaintances.

The work of Morris Blanchard, who goes by Onagottay and claims to be Anishinaabe, is featured throughout Kingston and has been published in a children's colouring book currently on the shelves of major retailers such as Chapters Indigo.

Over the years, Blanchard has accrued multiple awards and grants from public institutions, including the City of Kingston and Queen's University.

As an "elder," Blanchard teaches Ojibway through a local Indigenous language preservation program, which has held workshops for Queen's in the past. He has also taught art classes through a previous partnership with the university.

But those who know Blanchard, including his ex-wife and brother, tell CBC he is not who he claims to be.

"My family is white," said one of the artist's brothers, Allen Blanchard, who describes his family's ancestry as primarily Norwegian, English, with some French.

"From what I understand, my mom told me that we did have a little bit of Indigenous in us. She said it was 'Flatfoot.' … I'm not sure what that means."

He is the only family member to identify as Indigenous, according to his brother.

Questions about Blanchard's Indigenous background follow similar scrutiny over a handful of other prominent individuals in the Kingston area with ties to Queen's.

CBC News began investigating Blanchard after nearly 100 academics signed an open letter in June calling on the university to examine the potential harm of misrepresentation among faculty, staff and associates.

Just this year, Blanchard referenced his Indigenous heritage and being a survivor of the Sixties Scoop — referring to the government policy under which Indigenous children were taken from their families and placed in non-Indigenous homes over a period of about three decades.

"I grew up in a traditional way of life, Anishinaabe, and I [was] raised in the bush," Blanchard told the host of a podcast in early 2021.

"I'm a survivor of the Sixties Scoop and I don't read or write English and I follow my traditional way of life."

In numerous articles and biographies, Blanchard has been described as Ojibway, Métis, Blackfoot, Navajo, French and Norwegian.

"Onagottay is from Lake of the Woods, Ont., and grew up learning the language and culture of his people," read an article on the Queen's psychology department website.

In the same article, Blanchard is described as "a member of the Eagle Clan … a medicine man" and "a member of the Midewiwin Lodge where he is taught from the elders the sacred healing methods, including traditional medicines and their uses."

A Facebook post written about Blanchard for an event in Kingston said he was taken from his home at the age of four "to live on a Catholic-run work farm."

Another article from an online magazine said Blanchard "escaped from the boarding school authorities and was hidden and educated by his grandfather for 17 years."

As for the claim his brother is a Sixties Scoop survivor, Allen Blanchard says, "No way."

Allen Blanchard said the family is in fact from Atikokan, a small town in rural northwestern Ontario. While the children spent one year in foster care, Allen said Morris Blanchard returned to live with their parents until at least his late teens.

Much of what Morris knows about traditional living and culture comes from spending time with members of Seine River First Nation, according to his ex-wife Alice Cupp, who says she was married to the artist for nearly a decade in the 1980s.

"The medicines and traditional values that he's using, he learned it from the people over here in Fort Frances, especially from my grandpa and my uncle," said Cupp, who is a member of Seine River First Nation.

CBC News also reached out to officials that represent 11 First Nations in and around the Lake of the Woods area where Blanchard claims to be from. Each one confirmed Blanchard was not an enrolled member.

When asked why Blanchard is representing himself as Indigenous, both his brother and ex-wife said they could only speculate.

Blanchard is one of six people named in an anonymous report that circulated online earlier this year alleging individuals connected to Queen's were misrepresenting themselves as Indigenous.

Two Indigenous scholars have since penned a follow-up letter — separate from the open letter — to raise concerns about Blanchard because of his work teaching Indigenous language and culture.

The letter calls on the institution to immediately suspend its relationship with Blanchard and investigate all people named in the anonymous report.

Geraldine King, an Anishinaabe academic who co-wrote the letter, described Blanchard's actions as "a really sick form of settler colonialism."

"We've already had everything taken from us and then here's this trauma that is connected to land and displacement ... all that's left is this trauma and these horror stories," she said.

In a statement, Queen's University said it takes the concerns about Blanchard "very seriously" and is "beginning the important process of setting up a review of our internal processes around Indigenous identity."

The school notes there are no current ties with Blanchard and he "is not and has never been an employee of Queen's University."

"It's not the truth and that is very dishonouring to the legacy of the survivors," said Achneepineskum.

Celeste Pedri-Spade, an Anishinaabe associate professor at Queen's University and a member of Lac des Mille Lacs First Nation, said Blanchard is violating the trust of the next generation of Indigenous people.

Pedri-Spade said she met Blanchard when she brought her children to the Indigenous language preservation program and asked him about his history, since she is from the same region Blanchard had claimed to be from.

He didn't provide an answer, said Pedri-Spade, and this is "really difficult" to hear he is falsely claiming to be Indigenous.

"As an elder in a language program that's for children ... there's this claim here that is making me go like, well, what kind of environment did I bring my child and my children into?" Spade said.

No one from the language program responded to CBC's requests for an interview or comment.

The City of Kingston, which bestowed Blanchard with the Mayor's Arts Award in 2018, said it is "watching and learning" during the public discussion about claims of Indigenous heritage in the city.