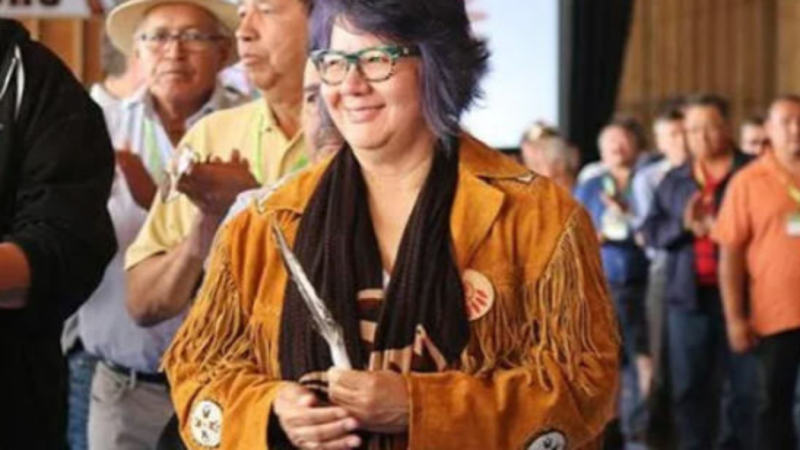 After five rounds of voting over the span of two days, former Ontario regional chief RoseAnne Archibald has been named the new national chief of the Assembly of First Nations (AFN).

"I am very grateful to be in this historic moment with all of you," Archibald said prior to her reading the AFN's oath of office.

Archibald is a member of the Taykwa Tagamou Nation (formerly New Post First Nation) in northern Ontario. She spent a three-year term as Ontario regional chief.

"The AFN has made 'her'-story today," said Archibald in her acceptance speech Thursday.

"Today is a victory and you can tell all the women in your life that the glass ceiling has been broken. I thank all of the women who punched that ceiling before me and made a crack."

Archibald has had a long history of holding leadership roles. She was the first woman and youngest chief elected for Taykwa Tagamou Nation (TTN) in 1990 at age 23.

After taking a break from politics for nine years, she became the first woman to be elected as Ontario regional chief in 2018.

"Chiefs, whether you voted for me or not, I have listened and I have learned from you. While there are differences that divide us, there is much that we share," said Archibald.

"We all want our children to grow up proud and surrounded by love, culture, ceremony, language, and safe vibrant communities."

She said her vision for the AFN is an organization that strengthens First Nations communities and furthers First Nations sovereignty, jurisdiction and inherent treaty rights.

Emily Whetung of Curve Lake First Nation in Ontario was one of the many chiefs to endorse Archibald's candidacy.

"RoseAnne will be the national chief we need at these difficult times. She's like the auntie who will keep us on the right path and will make sure we are heard," said Whetung during a virtual candidates' forum on Tuesday.

"She is a strong voice who will help us achieve change and build the relationships towards discovering truth and charting a path towards true reconciliation."

The election began Wednesday during the AFN's 42nd annual general assembly, hosted this year virtually in Toronto by the territories of Six Nations of Grand River and the Mississaugas of the Credit First Nation.

Seven candidates were vying for the position after outgoing national chief Perry Bellegarde announced in December that he would not be seeking re-election. Bellegarde, who is a member of Little Black Bear First Nation in Saskatchewan, served two terms.

The AFN says it represents more than 900,000 people living in 634 First Nation communities and in cities and towns across the country.

To win, a candidate had to secure 60 per cent of votes of the 406 band council chiefs or proxies who registered for the assembly. Voting extended into Thursday evening.

Candidates Cathy Martin, Lee Crowchild, Kevin Hart and Jodi Calahoo-Stonehouse were dropped after rounds of voting for having the lowest number of votes. Nishnawbe Aski Nation Grand Chief Alvin Fiddler withdrew from the race to support Archibald after the third ballot.