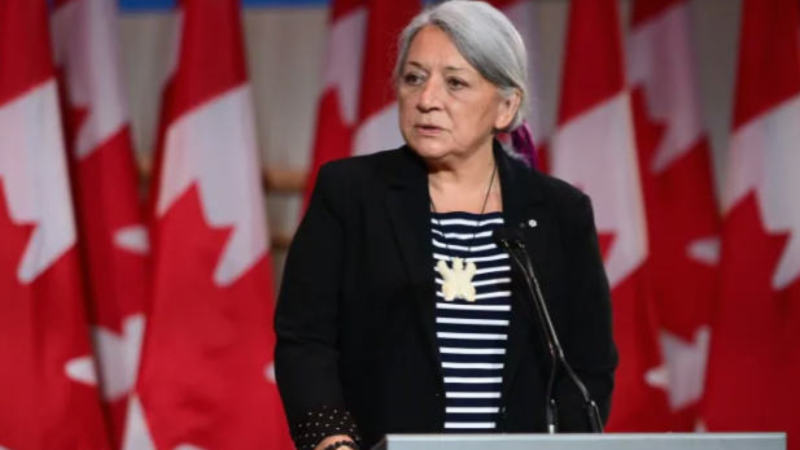 Inuk leader and former ambassador Mary Simon has been chosen as the next governor general — the first Indigenous person ever to be appointed to the role.

During a news conference across the river from Parliament Hill this morning, Prime Minister Justin Trudeau said that the Queen has accepted his recommendation to appoint Simon — a past president of Inuit Tapiriit Kanatami, the national Inuit organization — as the 30th governor general.

"I can confidently say that my appointment is a historic and inspirational moment for Canada and an important step forward on the long path towards reconciliation," said Simon from the Canadian Museum of History in Gatineau, Que.

"Indeed, my appointment comes at an especially reflective and dynamic time in our shared history."

Simon is an Inuk from Kuujjuaq, a village on the coast of Ungava Bay in northeastern Quebec. She was born to a local Inuk woman and a fur trader father who worked at a Hudson's Bay Company outpost.

Simon, who is bilingual in English and Inuktitut, attended the federal Fort Chimo day school in the Nunavik region.

Asked about her lack of fluency in French, Simon said she never had the opportunity to learn Canada's other official language while at this institution — a school that has been the subject of lawsuits over the mistreatment of students by administrators.

"I was denied the chance to learn French during my stay in the federal government day schools," she told reporters. She promised to learn the language while on the job.

Simon made her opening remarks in Inuktitut. It was a powerful moment for Natan Obed, head of the Inuit Tapiriit Kanatami and a member of the advisory board that helped select potential candidates.

"For a long time there have been barriers in place for First Nation, Inuit and Métis in this country, whether it's because of systemic racism, whether it's the fact that Indigenous languages are not official languages and therefore First Nation, Inuit and Metis are passed over because they might not have bilingualism in English and French," he said.

Simon said that she lived a "very traditional lifestyle" growing up in a subarctic region, but she also learned from her father, a white man originally from Manitoba, about the "non-native world."

"Combined, these experiences allow me to be a bridge between the different lived realities that together make up the tapestry of Canada," Simon said. "I can relate to all people no matter where they live, what they hope for or what they need to overcome."

After her schooling, Simon worked as an announcer and producer with CBC North before starting a decades-long career advocating for Indigenous rights.

She helped negotiate the James Bay and Northern Quebec Agreement in 1975, a landmark deal between the Cree and Inuit in Quebec's north, the provincial government and Hydro-Québec.

Widely seen as the country's "first modern treaty," the agreement saw the province acknowledge Cree and Inuit rights in the James Bay region for the first time — such as exclusive hunting, fishing and trapping rights and self-governance in some areas. It also offered financial compensation in exchange for the construction of massive new hydroelectric dams to fuel the growing province's demand for new energy sources.

Simon was subsequently elected president of Makivik Corp. in 1982, the organization created to administer the funds the Inuit received from the development on their lands. The organization now manages tens of millions of dollars worth of investments, including an ownership stake in Canadian North, a major air carrier in the Arctic.

The president of of Makivik Corp, Pita Aatami, said that in Nunavik they all know the Queen's new representative as "Mary."

"We are extremely proud of her appointment," he said in a statement.

"This is a new chapter in Canada's relationship with Inuit, First Nations, and Métis. Having an Indigenous person as the Crown's representative in Canada sends a strong message to the nation, and to the international community."

In 1986, Simon was tapped to lead the Inuit Circumpolar Conference (ICC), a group created in 1977 to represent the Inuit in all the Arctic countries. At the ICC, she championed two priorities for Indigenous Peoples of the north: protecting their way of life from environmental damage and pushing for responsible economic development on their traditional territory.

As governor general, she will serve a vital constitutional role; past governors general, most recently Michaëlle Jean, have had to adjudicate constitutional disputes. She's also no stranger to Canada's Constitution.

As an Inuit leader, she was on hand when the Constitution was repatriated in the 1980s. She was part of former prime minister Brian Mulroney's attempts to amend the Constitution as part of the Charlottetown Accord process in the early 1990s.

In 2002, former prime minister Jean Chrétien named her Canada's first Arctic ambassador, a position where Simon worked closely with other circumpolar countries to bolster co-operation in the region. She also served as Canada's ambassador to Denmark.

She served two terms as the president of the Inuit Tapiriit Kanatami (ITK), the national Indigenous organization that works to advance Inuit rights. Her focus at the ITK was on advocating for more resources for young people in the North, and she accepted former prime minister Stephen Harper's apology for the past treatment of Indigenous peoples in the residential school system.

"Today after 154 years our country takes a historic step. I cannot think of a better person to meet the moment," said Trudeau.

"It is only by reaching out to those around us, it is only by building bridges between people in the north and south, just like in the east and west that we can truly move forward."

Her appointment comes during a time of reckoning in Canada's relationship with Indigenous Peoples — after radar technology discovered what's believed to be the unmarked graves of hundreds of children near former residential schools.

When asked about her unique position as the first Indigenous governor general, Simon said she doesn't see any conflict between her identity and her new role.

"Because as the Queen's representative in Canada, I am very concerned about the circumstances that led to some of the events that we are seeing today. I do understand as an Indigenous person that there is pain and suffering across our nation," she said.

"When I was asked whether I would take on this important role, I was very excited and I felt that this was a position that would help Canadians together with Indigenous Peoples."

Monica Ell-Kanayuk, the president of the ICC, said Simon already has experience representing the Crown.

"As Canada's former ambassador to the Arctic, and ambassador to Denmark, our new governor general has experience acting on behalf of the Crown and understands the challenges faced by Inuit and other Indigenous Peoples in Canada," she said in a statement.

"Canada has appointed a skilled diplomat to a position that can contribute to the reconciliation process Canada is engaged in."

Obed said Indigenous people have a complex attitude toward the institution of the governor general's office.

"There have been conversations over the past two decades about whether or not Canada is ready for an Indigenous governor general and whether that would be appropriate," he said.

"So it is a longstanding political conversation. Absolutely, it's not black or white. Many Indigenous people have negative feelings toward that institution, but that's not all Indigenous people."

The Native Women's Association of Canada congratulated Simon but said she "is being asked to serve the senior role in what is still a colonial system of governance."

"To achieve true reconciliation, the federal government must re-examine its appointments of ministers to lead departments that have a profound effect on Indigenous lives – the departments of Crown-Indigenous Relations and Indigenous Services," said the group in a statement.

The appointment comes more than five months after Julie Payette resigned from the post after a scathing external review found she had presided over a "toxic" and "poisoned" workplace at Rideau Hall, with episodes of "yelling, screaming, aggressive conduct, demeaning comments and public humiliations."

The third-party review gathered testimony from more than 90 people and was triggered by a CBC News story about alleged mistreatment of staff by Payette and her second-in-command, who also later resigned. Payette has said she takes workplace harassment seriously.

Payette offered her congratulations and support to Simon today, tweeting that she is "at her disposal" while she transitions into the new role.